The one with Barbie Almalbis' new album, Parade 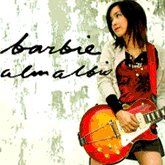 Barbie Almalbis, one of Philippine music's premiere female singer-songwriters, has released her first solo album, Parade under 12 Stone Records. I've been a Barbie fan since her Hungry Young Poets days, and this album is a stellar representation of Barbie Almalbis' growth, as a musician, songwriter, Christian, and woman.

While Parade comes a little short of the brilliant Music from the Buffet Table, there are a lot of tracks on Parade that show exactly how brilliant Barbie Almalbis is. Parade shines with many radio-friendly nuggets and introspective tracks that it's hard not to pick out a favorite. Barbie Almalbis' current radio singles receiving airplay are irresistibly light Summer's Day, which is the theme song to some product they're currently promoting on radio, the name of which escapes me at the moment, and High, a revival of the original by Filipino-American band The Speaks, which features brilliant interplay and heartfelt vocals between Barbie and Raf, the lead singer of The Speaks.

Another highlight on Barbie's Parade is her own retake on Pag-alis, a song from the first Barbie's Cradle album. Cathy's favorite track off that album has gotten a left-of-center remake, sped up a teeny bit to add depth and texture, and reworked with new vocals and a few changes in lyric. Stunning and thought-provoking.

I love the artwork on Barbie Almalbis' Parade. Featuring work by different artists, including my favorite bohemian artist-entrepreneur-woman of the world, Corinne Ching, the liner notes and design of Parade are a joy to read and look at. Parade should be a surefire nominee in the Awit Awards' Best Album Design category; it's breathtaking.

Ultimately, Parade does exactly that: it parades Barbie. I love Barbie for how down-to-earth she is. No airs about Barbie at all; what you see is what you get. I remember back in the day when Barbie would perform at Gotham in Malate, she would invite me to join her onstage to sing Big Yellow Taxi or Galileo. Of course, her career's skyrocketing, and I'm still trying to get off the ground, but no matter. I praise God that Barbie is now so totally in love with the Dude above all Dudes, Jesus Christ, and her career is showing how He's going to use her mightily to bring people to His Father.

May Barbie's new album Parade be a tapestry of color and sound that pleases you. Be sure to pick up a copy of the new Barbie Almabis album Parade at your local record bars. Buy legit and support local Filipino music.